Ryhall CE Academy's, creative project started during the week of ‘World Environment Day’ on the 5th of June 2018.  The theme for the day was ‘Beating Plastic Pollution’. The school's Eco Warriors decided that they wanted everyone in school to make something reusing waste plastic to go on a display and the idea of creating butterflies from milk bottles was first suggested.
After many weeks collecting, cleaning and cutting out milk bottles into several butterfly shapes, the Eco Warriors ran workshops for each year group and their respective staff to decorate their own individual butterflies. These were then tied to the school fence in a long wave. The final result looked lovely especially as they appeared to flutter in the wind.
Later in the year, each class went on a litter pick in different areas of their village and all were surprised at how much litter they collected. This led to the creation of another whole school display showing the sea split into two; one side depicting how they thought the sea should ideally look and the other side showing the reality of plastic pollution in our oceans. 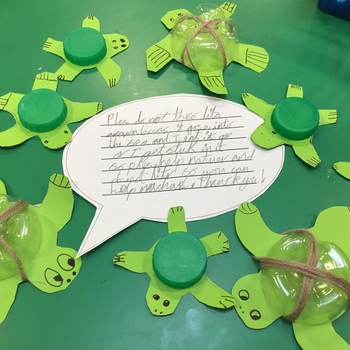 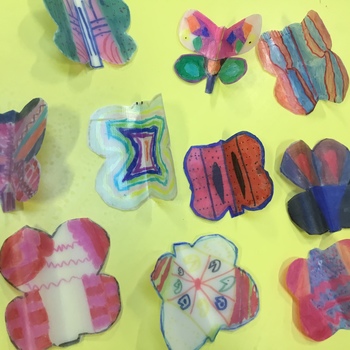